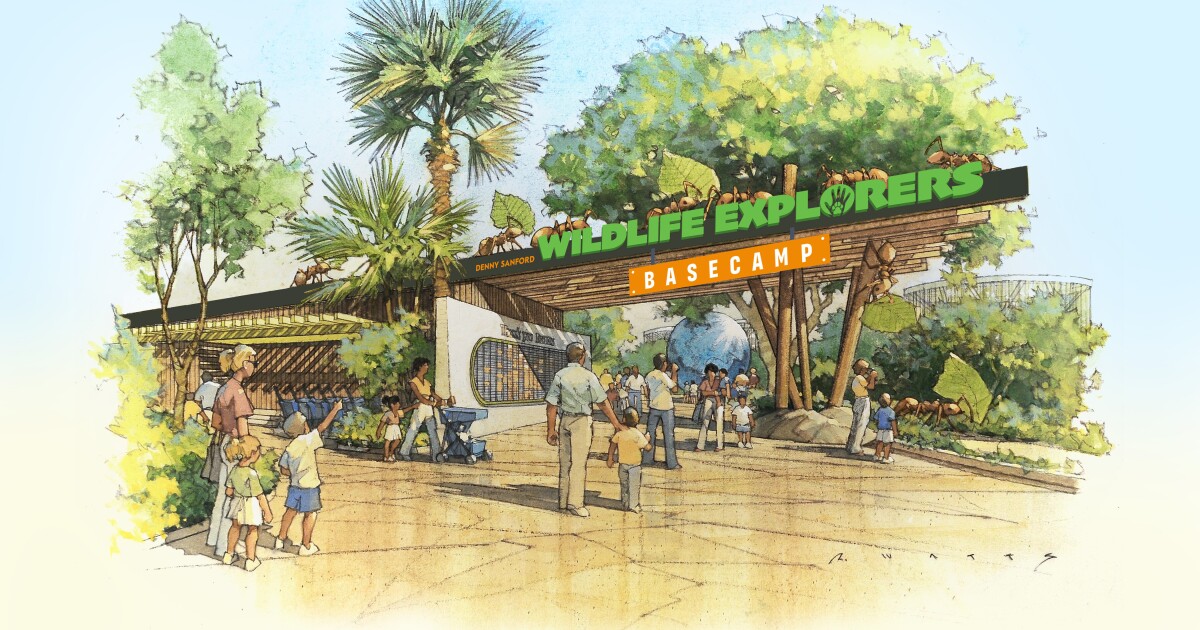 After more than a decade of planning and years of construction, San Diego’s revamped and reimagined Children’s Zoo is set to open in February.

The 3.2-acre, $87 million Denny Sanford Wildlife Explorers Basecamp has been designed to immerse visitors in the sights and sounds of ecosystems around the world, from balmy rainforests to dusty dunes. And there’ll be an extra emphasis on getting young guests passionate about conservation at a time when climate change is increasingly affecting the health of animals and people, says Paul Baribault, CEO of the San Diego Zoo Wildlife Alliance, which operates both the zoo and Safari Park.

This story is for subscribers

We offer subscribers exclusive access to our best journalism.
Thank you for your support.

“What we’re seeing today is families, youths are spending less time outdoors than ever,” he said. “This is an opportunity for us to inspire the next generation and to bring audiences in to develop a much deeper understanding at an early time in their life about the importance of conservation.”

More than 3,000 donors bankrolled the project, including some of the region’s biggest benefactors: Denny Sanford, Ernest and Evelyn Rady, and the Conrad Prebys Foundation, among others.

Sanford, a billionaire banker who owns a residence in La Jolla, contributed $30 million. That celebrated donation came under scrutiny in August 2020 when investigative news organization ProPublica reported that he was under investigation for possible possession of child pornography.

“Denny Sanford has been, and continues to be, one of our organization’s greatest supporters. What his gifts have provided to our guests here in San Diego at our parks, as well as reaching millions globally through his support of San Diego Kids programming, is unparalleled,” said the organization in an email. “He has not been charged, and we continue to value our long relationship with him and remain grateful for the impact he has had on our organization.”

The new project, dubbed basecamp for short, is more than 90 percent complete and is located on the same grounds as the original Children’s Zoo, near the new hummingbird and Komodo dragon exhibits. Major construction began in May 2019, months after the old Children’s Zoo closed for good.

Basecamp is divided into four areas that showcase the plants and animals of the world’s rainforests, wild woods, marsh meadows and desert dunes. The main entrance ushers visitors into the desert habitat, where you can see prairie dogs, burrowing owls and fennec foxes. The marsh meadows area, which begins with outdoor tanks filled with fish, turtles and crocodiles, draws guests into the 7,000-square-foot Art and Danielle Engel Cool Critters building, which will have snakes, giant salamanders, endangered Fijian iguanas, and other amphibians and reptiles.

Nearby is the rainforest section, centered around the two-story, 10,000-square-foot McKinney Family Spineless Marvels building, which plunges visitors into the world of insects, spiders and other invertebrates. The area near the entrance looks like an open field, with digital images of butterflies, dragonflies, grasshoppers and fireflies dancing across the walls.

Further in, there are giant beeswax-coated panels shaped into larger-than-life honeycombs so that children can imagine themselves as bees. Nearby, visitors can peer through glass panels and see a real hive buzzing with activity and learn about native bee species, too. And there’s a two-story leafcutter ant habitat where you can see these industrious insects snip leaf bits and drag them to underground chambers to grow fungus and feed their larvae — not so different from how farmers cultivate crops.

It’s all a dream come true for Paige Howorth, the zoo’s curator of invertebrates. She hopes visitors walk out seeing insects as a key part of healthy ecosystems and less as creepy crawlies. Guests can watch Howorth and her team care for various spiders, beetles and caterpillars from behind a clear glass pane and will be able to ask the team questions through an intercom. That’s a conversation she welcomes.

“It’s easy to love a panda. It’s less easy to love a cockroach,” said Howorth. “We want to meet that in every way that we can with soothing music, with beautiful graphics, with welcoming exhibits and habitats for the animals so that people want to see what’s inside and learn more about them.”

Giving visitors a sense of what it would feel like to be the animals they’re looking at is also a feature of the wild woods area, where guests can see squirrel monkeys and coatis, small mammals that resemble and are related to raccoons.

The walkways near these exhibits mirror the animal habitats, with kids able to run and jump on roped bridges, platforms and a mock tree that resembles the design of the squirrel monkey exhibit. Psychologists call this sort of interaction parallel play, and it’s a key part of social development in children. The zoo hopes it’ll help build empathy for wildlife, too.

The new experience will differ markedly from the original Children’s Zoo, which opened on June 30, 1957. More than 6,000 people lined up for entry into what The San Diego Union, one of two papers that later merged to form the Union-Tribune, dubbed “a little zoo for little people.”

“They can put their arms around the neck of a llama. They can hug a baby dear,” declared the paper. “There are sea lions they can give fish to, and Galapagos tortoises they can ride. They can mingle with chittering finches and coax quail off their roosts.”

In more recent years, Children’s Zoo visitors could pet sheep, goats and other farm animals. But times have changed, Baribault says, and a petting zoo isn’t the best reflection of the organization’s commitment to saving endangered wildlife.

Not everyone was thrilled with the change.

“Wild animals are rightfully off-limits to human touch at the zoo, but farm animals?” wrote one U-T reader in 2018 in response to a story about the new Children’s Zoo. “Don’t rob future generations of this San Diego treasure. Save the Petting Paddock!”

Zoo officials stress that basecamp isn’t just for kids, which is why they’ve avoided calling the new project a Children’s Zoo. Instead, Baribault says, it’s meant to get everyone thinking about how they can contribute to conservation, from the young to the young at heart.

“This is going be such a special place for discovery,” he said. “We want every guest to come here, feel inspired when they’re here, leave inspired, and have fun doing it.”